MIAMI, FL (June 11, 2014) – The Caribbean Hotel & Tourism Association (CHTA), at the Annual General Meeting (AGM), has elected Karolin Troubetzkoy president-elect for the 2016-18 biennium. She will spend the next year working closely with current CHTA President Emil Lee before taking office in June 2016. Troubetzkoy currently is First Vice President of CHTA, President of the St. Lucia Hotel and Tourism Association and Executive Director, Marketing and Operations of Anse Chastanet and Jade Mountain Resorts in St. Lucia. 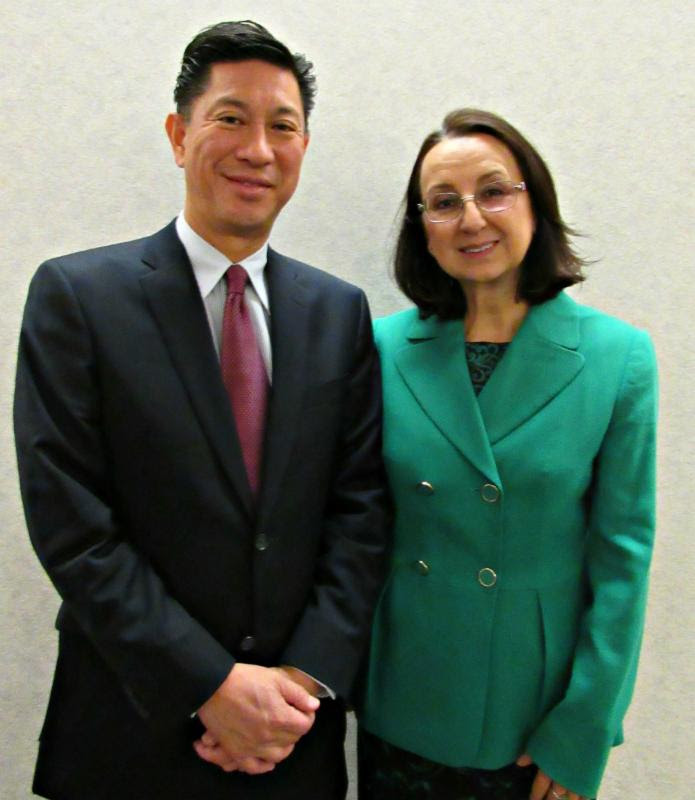 Pictured above: CHTA President Emil Lee with President-Elect Karolin Troubetzkoy.
Troubetzkoy was elected by acclamation at CHTA’s AGM which was held in conjunction with the annual “Taste of the Caribbean” culinary competition in Miami.
“The CHTA membership made a great choice in selecting Karolin Troubetzkoy as the president-elect,” said Lee. “She has been a leader within the St. Lucia hotel and tourism industry and has shared her expertise in marketing and hotel operations as part of CHTA’s volunteer leadership which have helped move the association forward,” Lee added.
“I am honored to be selected as president-elect of CHTA and look forward to working with current president Emil Lee,” said Troubetzkoy. “I will continue to work with the CHTA leadership on the evolution of our Association and to strengthen the National Hotel and Tourism Associations across the region,” she added.
Troubetzkoy has served as President of the Saint Lucia Hotel and Tourism Association (SLHTA) since 2010 where she been instrumental in the successful implementation of a hotel booking engine for the association as well as the launch of a Saint Lucia Tourism Enhancement Fund. She oversaw the development of a broad social media platform for the SLHTA including profiles on Twitter, Instagram, Facebook, LinkedIn, Google+ and Pinterest as well as the launch of several websites for the association.
She is a Director of the Saint Lucia Tourist Board and the Chairperson of the Tourist Board Marketing Committee, where she has been an active member for the past 20 years.
Troubetzkoy is the Chairperson of CHTA’s Caribbean Alliance for Sustainable Tourism (CAST) and previously served as Chairperson of the CHTA Advocacy Committee from 2012-14. She is also a Board member of the Caribbean Tourism Development Company (CTDC).
Troubetzkoy has been spearheading the marketing and day-to-day operations of the award-winning Anse Chastanet and Jade Mountain resorts for more than 30 years.
Troubetzkoy is a past recipient of CHTA’s Caribbean Hotelier of the Year Award (2012), St. Lucia Hotelier of the Year Award (2006) and Crystal Award for services to the hotel industry from the St. Lucia Hotel and Tourism Association.
She holds a degree in business administration with majors in both tourism marketing and hotel and restaurant management from the University of Applied Sciences in Munich, Germany.
Caribbean Hotel & Tourism Association
The Caribbean Hotel & Tourism Association (CHTA) is a federation of 32 National Hotel Associations, with more than 600 member hotels and over 300 allied members. CHTA is the largest representative of the private sector in the Caribbean hotel and tourism industry. We are the voice of the Caribbean hospitality industry for the development of the region in the highly competitive and sophisticated environment of international tourism. Today, tourism is widely recognized as a pivotal industry in the economy of the region – and CHTA functions as the common denominator for this industry in a region of diverse nationalities, languages and styles, identifying mutual problems and marshaling the resources of the active and allied members to devise solutions. CHTA represents all facets of the hospitality industry with more than 600 member hotels and over 300 allied members.
CHTA, including the events staged by the association, is supported by Strategic Partners MasterCard, Cable & Wireless, HVS, Interval International, OBM International, Tambourine and TravelZoo.
For more information, visit http://www.caribbeanhotelandtourism.com. Follow CHTA on Facebook Facebook.com/CaribbeanHotelandTourismAssociation and TwitterTwitter.com/CHTAFeeds.