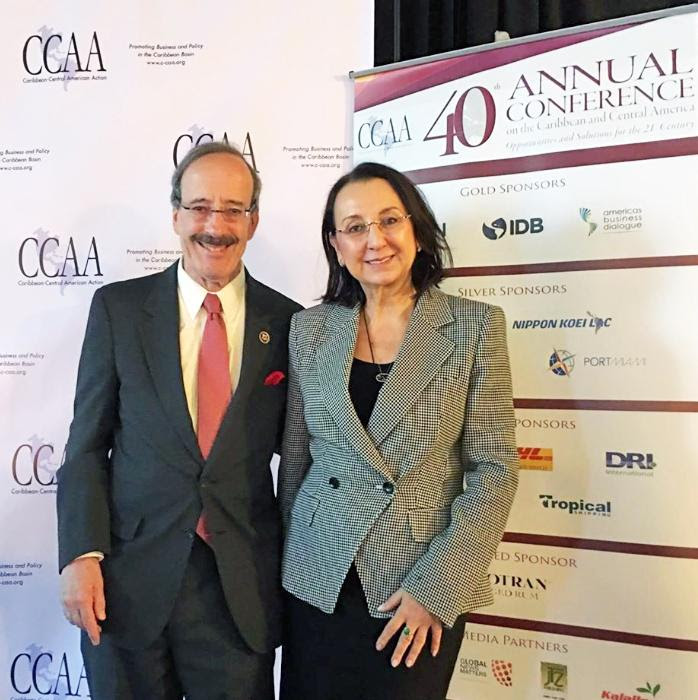 TOURISM KEY TO US-CARIBBEAN INTERESTS
CHTA Joins Regional Effort Supporting Passage of US-Caribbean Strategic Engagement Act
MIAMI (December 9, 2016) – The Caribbean must ensure issues of critical socioeconomic importance are firmly addressed with the U.S. Congress and the incoming administration, according to Karolin Troubetzkoy, President of the Caribbean Hotel and Tourism Association.
Troubetzkoy commented on this during her presentation on the impact on the tourism industry of de-risking and correspondent banking relationships at the 40th Annual Conference on the Caribbean and Central America in Miami, produced by the Caribbean-Central American Action (CCAA) organization.
Underscoring the common interests between the Caribbean and the United States and the critical importance of tourism to the region’s socioeconomic development and stability, Troubetzkoy called for a new focus by the region’s governments and private sector in support of recent legislation aimed at strengthening United States relations with Caribbean countries.
CHTA has joined CCAA in urging the U.S. Senate to adopt the US-Caribbean Strategic Engagement Act of 2016 (H.R. 4939), which has already received bipartisan support in the House of Representatives, and just this week moved out of Senate Committee for consideration now by the full Senate.
H.R. 4939, introduced by Congressman Eliot L. Engel (D-NY) with Congresswoman Ileana Ros-Lehtinen (R-FL), would require the U.S. Secretary of State and the Administrator of the U.S. Agency for International Development (USAID) to submit to Congress a multi–year strategy focused on enhancing engagement with the countries of the Caribbean.
The draft legislation, which emphasizes energy security, countering violence, expanded diplomacy, engagement with the private sector, and other priority areas, sets the stage for a new U.S.-Caribbean relationship, declared Troubetzkoy, who met with Congressman Engel during the conference.
Before Congress adjourns, CHTA is supporting the outreach by CCAA to the U.S. Senate to advance passage of the legislation in the Senate.
Troubetzkoy also recalled a key U.S. policy which underscored the special relationship between the United States and its Caribbean neighbors: “We must also not forget the Third Border Initiative and our envoys must convey to the new administration that the Caribbean’s success is in the strategic interest of the United States of America.”
Congressman Engel noted: “We spend a great deal of time focusing on challenges and opportunities in faraway places. But it’s important that we never lose sight of our interests closer to home. Indeed, we should be working to strengthen our ties with countries in the Caribbean. That’s the aim of this bill, which would prioritize U.S.-Caribbean relations for years to come.” He also addressed the need to pay more attention to the Caribbean in a recent editorial published in The Miami Herald.
Speaking on a panel on “Tourism, Trade and the Unintended Consequences of De-Risking”, Troubetzkoy called for continued action on priority areas such as “de-risking” or “de-banking,” in which large U.S. banks, sensitive to fraud and money-laundering allegations, end their business connections with smaller banks in other regions like the Caribbean.
De-risking threatens the Caribbean region’s smaller banking sector which operates in jurisdictions which host overseas banking facilities. For many hotels and tourism-related businesses in the region, there are limited banking options in their destinations.
Troubetzkoy asserted the Caribbean is suffering more than others from de-risking, as trade is affected directly. Tourism is the largest income generator in the region, and she urged the sector to be more alert to the threat.
“The Caribbean tourism industry must pay close attention to the very serious effects the withdrawal of correspondent banks would have on our industry,” said Troubetzkoy, adding that these long-standing banking relationships are vitally important to the region’s survival. “If the industry is disrupted and we are unable to interact with overseas buyers and clients, the consequences will be dire.”
The annual Conference on the Caribbean and Central America tackles issues which affect the region’s economic growth and competitiveness. According to CCAA, the hotel and tourism industry is at the front lines, and the ability to do business-as-usual in a competitive global market is critically important.
About the Caribbean Hotel and Tourism Association (CHTA)
The Caribbean Hotel and Tourism Association (CHTA) is the Caribbean’s leading association representing tourism interests for national hotel and tourism associations. For more than 50 years, CHTA has been the backbone of the Caribbean hospitality industry. Working together with 1,000 hotel and allied members and 32 National Hotel Associations, CHTA is shaping the Caribbean’s future and helping members to grow their businesses. Whether navigating new worlds like social media, sustainability, legislative issues, emerging technologies, data and intelligence or looking for avenues and ideas to better market and manage businesses, CHTA is helping members on matters that matter most.
For further information, visit www.caribbeanhotelandtourism.com.