ST. LUCIA (February 15, 2021) – Some two million viewers across the United Kingdom got a glimpse of the creativity of visionary architect Nick Troubetzkoy whose award-winning Jade Mountain Resort in St. Lucia was featured last week on BBC Two’s popular television programme – “Amazing Hotels: Life Beyond the Lobby”.

In the series, journalist and restaurant critic Giles Coren and international chef Monica Galetti roll up their sleeves and go behind the scenes, working in some of the most extraordinary hotels around the globe.

Episode One of the latest series of Amazing Hotels sees Chef Monica and Giles visit Jade Mountain in Soufrière, famous for its unique, open walled sanctuaries with private infinity pools overlooking the Pitons. 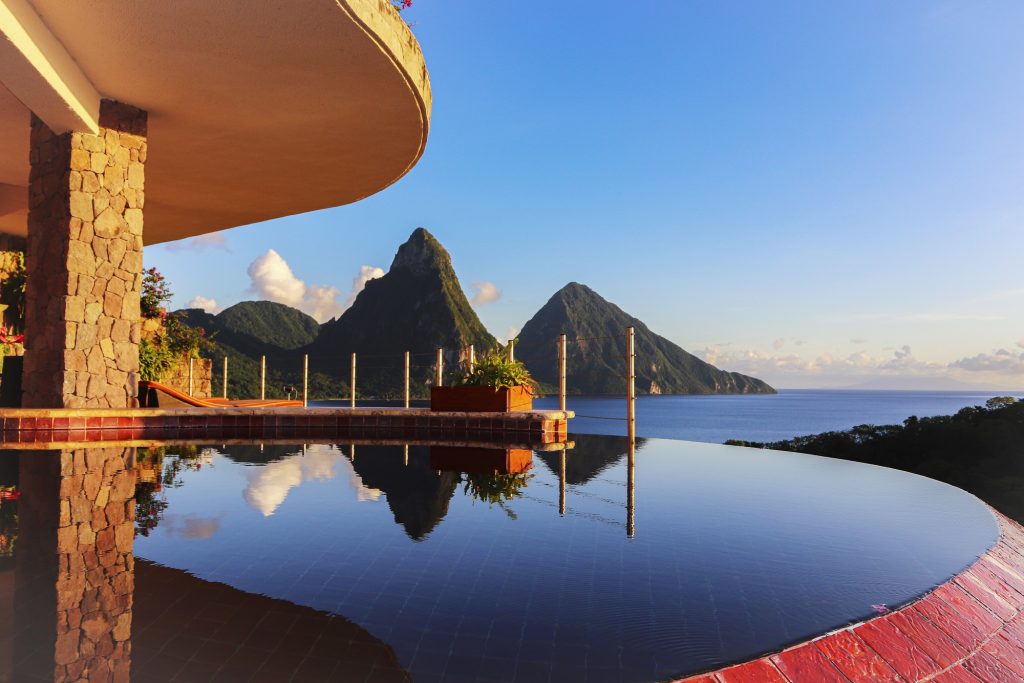 The episode features the reporters discovering what it takes to deliver exceptional service, as they involve themselves in the resort’s day-to-day operations. They deliver room service, sweep the beach, clean the pool, go to the local market, learn about the island’s history, and even harvest cocoa at the resort’s organic farm.

After diving and hunting for lionfish, an invasive species, they serve the freshly caught seafood to guests enjoying a private dinner on the beach. Throughout the episode, the duo interview and interact with resort team members, showcasing St. Lucian professionalism, warmth and pride. Built by a local workforce of more than 500 construction professionals, Jade Mountain evokes a rare but strong sense of ownership among its team members. 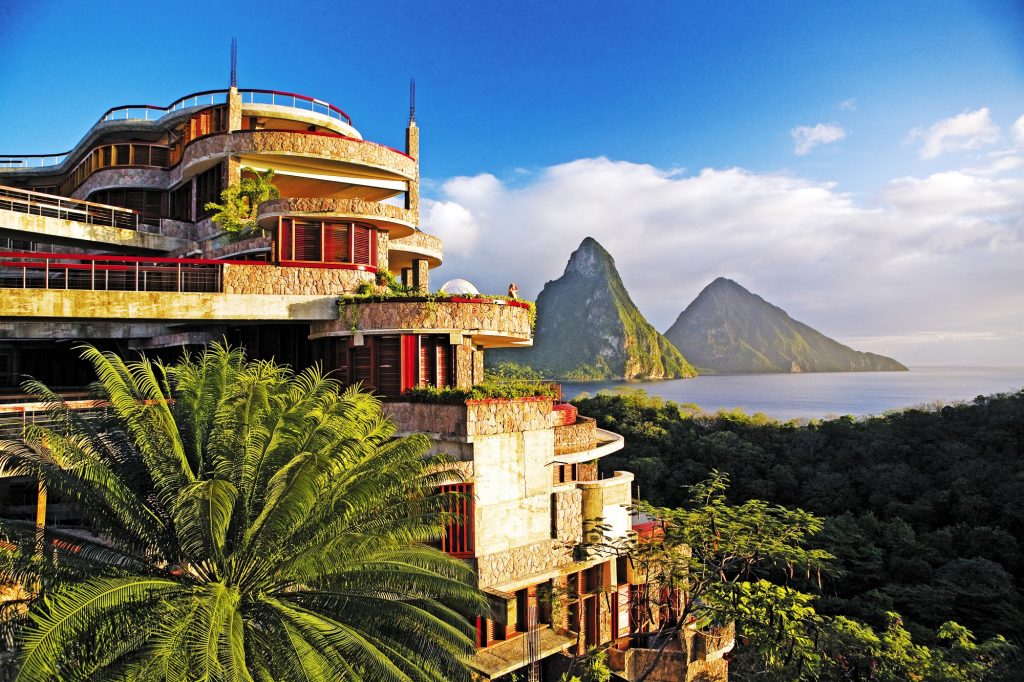 Described by the British media as “jaw-droppingly stunning” and “an architectural, eco-friendly wonder”, the luxurious property, whose owners Karolin and Nick Troubetzkoy are pioneers in Caribbean tourism sustainability, is routinely ranked by travelers and the travel trade alike as a top choice for luxury, service, culinary distinction, and overall experience, and helps position St. Lucia among the leading tourism destinations of the world.

Designed by architect and owner Nick Troubetzkoy, Jade Mountain is set high on the hills overlooking St. Lucia’s Piton Mountains, a UNESCO World Heritage Site, and comprises 24 open-air Infinity Pool Sanctuaries and five Sky Jacuzzi Suites, each of which is a carefully designed, individual work of art and architecture. Jade Mountain shares a 600-acre estate complete with two beaches and miles of resort hiking and biking trails with sister resort Anse Chastanet. There are several restaurants and bars, spa, scuba centre and even a chocolate laboratory. 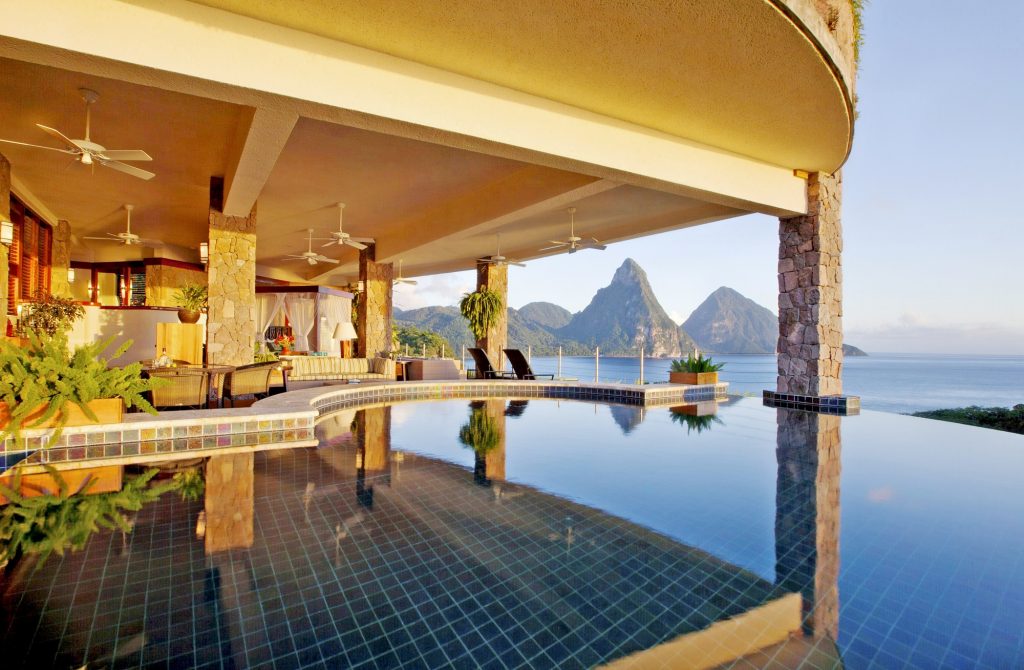 Nick Troubetzkoy, who has lived and worked in the Soufrière community since the 1970s, was instrumental in establishing the Soufrière Foundation and advocated for the creation of the Soufrière Marine Management Authority (SMMA). Buying local and building local has been his mantra throughout. To minimize “tourism leakages” and help support local artists and businesses, the resorts buy, display and sell locally produced artwork, handicraft and other goods. Anse Chastanet and Jade Mountain also actively support community initiatives and local charities.

Commenting on the television programme, Karolin Troubetzkoy, Executive Director of Jade Mountain and Anse Chastanet, expressed delight with the response to the BBC special, admitting that the resort’s website was inundated and even temporarily crashed under the volume of traffic generated after the show’s airing. “I am thrilled that the work of my husband can be archived by such a preeminent media outlet, and this also helps to place the spotlight on our island nation during such a challenging pandemic. My hope is that the whole island will eventually reap the benefits of this exposure.” 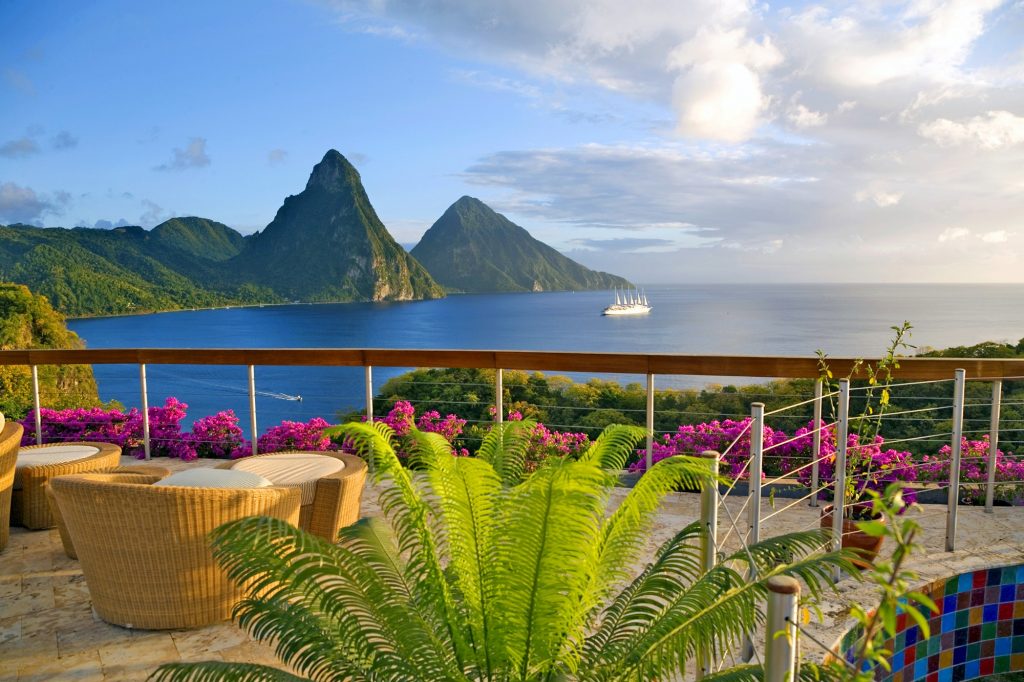 In addition to those who viewed the episode when it aired on BBC Two on Thursday, Feb. 11, the show also enjoyed extensive press coverage in the UK: It received ‘pick of the day’ in 34 different national papers and magazines, and was given 4 stars from The Times and Daily Mail.

The Troubetzkoys, who have protected the jobs of over 500 team members throughout the pandemic, hope that travel and tourism will recover over the next few months as vaccines reach more people and COVID-19 transmissions decrease locally and internationally.

The program can be viewed on BBC 2 player here.