The traffic through Castries creeps along at a glacial rate, past bustling street markets and under the shadows of enormous cruise ships that seem to have arrived from a world operating on an entirely different scale.

“It’s the sleeping policemen slowing everyone down,” our taxi driver explains as our car crunches over one of the St Lucian capital’s many speed bumps. “When I tell the Americans that they look at me in shock.” Clearly they don’t name their traffic-calming measures after law enforcement officers in the US…

Once we’ve left Castries and begin to make our way south, along the winding, undulating road that runs along the west coast of the small Caribbean island, the traffic melts away. We pass tiny villages full of brightly painted houses, empty bays and countless banana plantations, where the fruit – ‘green gold’ – hangs wrapped in bright blue bags.

This isn’t the usual route to the twin luxury resorts of Anse Chastanet and Jade Mountain – most guests will come from the island’s main airport in the southeast – but it’s by far the most spectacular, particularly once the island’s landscape-dominating Piton mountains gatecrash the view. These twin volcanic spires rise up from the edge of the land, as though bursting out of the sea, with the old colonial capital, Soufrière, dwarfed at their feet.
We turn off the road before it reaches the city, onto a rutted gravel path that eats its way through the rising, densely forested landscape. Our driver, it’s safe to say, looks like he’d much rather be back in Castries, juddering over sleeping policemen.

When we arrive at Anse Chastanet – to his obvious relief – it takes me a while to accept that we’re actually there, so well disguised among the tropical vegetation are the buildings. That, of course, is the idea – and it makes perfect sense as we’re welcomed into the reception (which doubles as a bar and restaurant). Like many of the resort’s buildings, it’s open to the elements at the sides and mingles with the trees and plants, with views of the Pitons and the still, blue Caribbean Sea that look like they’ve been painted onto a giant canvas.

That barely believable vista is one you’ll get used to seeing – but never get bored of – at Anse Chastanet. Lying on the beach? It’s there. Kicking back on your suite’s terrace? Still there. Snorkelling in the coral reef on the edge of the bay? Pop your head out of the water and it’s the first thing you’ll see.

Spectacular scenery apart, there’s no shortage of things to do at Anse Chastanet, day or night. For starters, there are the resort’s two beaches, both of which are the jumping-off point for a huge number of activities – not least of which is lazing around on the sand with a cocktail in your hand. That aside, you can take a snorkelling trip to the reef that skirts the base of Petit Piton (the closer of the two), hire mountain bikes and tackle the purpose-built trails through sprawling jungle, or take a sailing boat or kayak out on the calm, crystal-clear waters. You can even take trips to the resort’s chocolate laboratory, which makes indecently good use of the abundant cocoa trees on the Anse Chastanet estate and its farms.

If you’ve still got an appetite after gorging yourself on chocolate, the resort has a number of restaurants, all serving delicious food made with locally sourced ingredients – from Caribbean-inspired cuisine at Treehouse (accompanied by birdsong from the overhanging trees) to Apsara’s Indian fusion, served just metres from the sand. Though all slightly different, each has the same welcoming atmosphere and charm – as do Anse Chastanet’s rooms, which mix rustic colonial style with the kind of luxury you’d expect from one of the island’s best loved resorts.

But for all that Anse Chastanet blends seamlessly and beautifully with its surroundings, sister hotel Jade Mountain takes the concept to another level.

We’re booked in there for the remaining few days of our stay, and a short way into the brief uphill walk (or decadent shuttle ride) from our suite at Anse Chastanet, Jade Mountain arrives in view. First, all we see is a network of bridges, criss-crossing on multiple levels, and then the main building itself comes into view – a jaw-dropping piece of architecture that looks like the world’s most luxurious treehouse, all sweeping curves and interconnecting pathways. The roofs sprout tropical foliage and at night – with each pathway gently lit – the whole place radiates an otherworldy glow.

And when we arrive at our suite (via our own private bridge) the biggest statement of all reveals itself: the building has no back. The Piton-facing side of the colossal, open-plan space (they call them ‘sanctuaries’ at Jade Mountain) is open to the air, with only a subtle barrier separating you from the world outside. A (huge) private infinity pool edges out into nothingness, and light, air and the sound of birds drifts in. In the evening, with the Pitons bathed in moonlight – and close enough that you’re tempted to reach out from the pool and poke them – it’s as atmospheric a place as you’ll ever bed down in.

So it says something that any of the hotel’s guests ever make it out of their rooms and into Jade Mountain’s bar and restaurant, though it’s clear why they do. The food – echoing the hotel – is modern and inventive, but founded on the best of the local environment and shot-through with Caribbean charm. Service, too, is unobtrusive but, when you need it, as friendly, efficient and effortless as you’ll find. 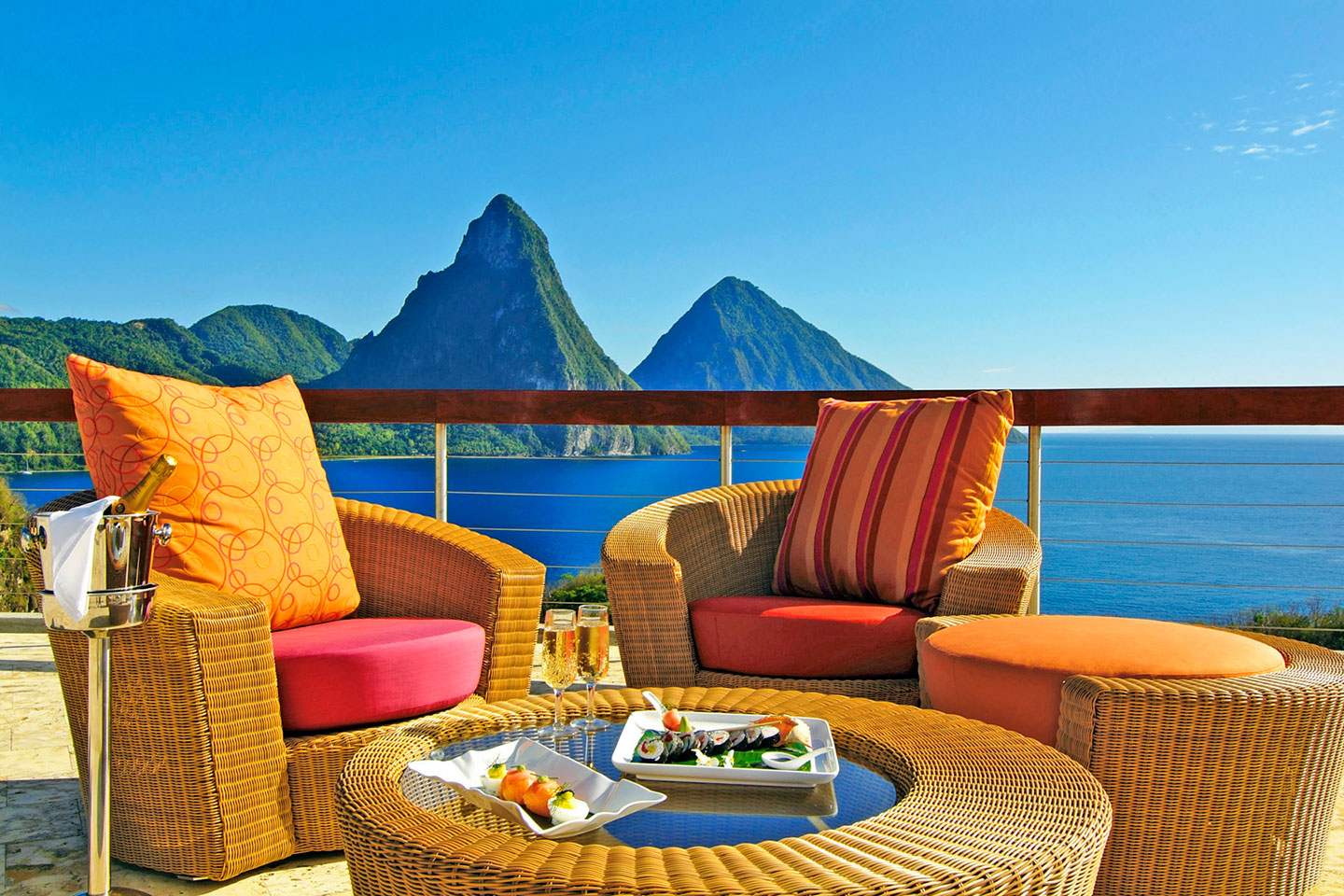 Sit back, relax and take in the views from Jade Mountain.

What you won’t find anywhere other than here, however, is that view – and a kind of natural but deep-running luxury that coaxes you into a state of total bliss. It’s no surprise, then, that on the last morning of our stay we find ourselves on the rooftop of the hotel, lying on our backs as the first light of the day washes over us. “Relax your body,” whispers the yoga instructor – which isn’t difficult as I’m splayed out on the floor with my eyes closed and it’s 7am.

So I do exactly that, and only the cool morning breeze and the sound of nearby wildlife stop me falling asleep. Early morning yoga isn’t quite how I’d envisaged spending my final hours here, but I wouldn’t have it any other way. And there in the background – as they always seem to be at Anse Chastanet and Jade Mountain – loom the Pitons, the island’s two enduring icons. That view, more than anything else, is the ultimate luxury.