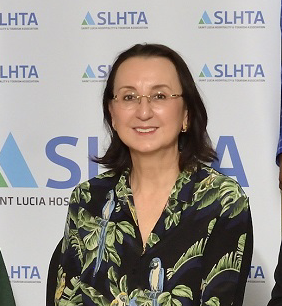 On Sunday, March 8, the Saint Lucia Hospitality and Tourism Association (SLHTA) will join the World in celebrating International Women’s Day and honoring the achievements of women through the ages and across the globe. We will also use the occasion to continue to advocate for gender parity and women’s rights here in St. Lucia.

We endorse this year’s theme, “I am Generation Equality: Realizing Women’s Rights”, which aligns with UN Women’s new multigenerational campaign, Generation Equality, a powerful roadmap for empowering women and girls, and we pledge to continue to promote these noble aims throughout the year and beyond.

Women and girls in many lands still face massive barriers to advancement and real change has been agonizingly slow around the world. Today, not a single country can claim to have achieved gender equality.

Here in St. Lucia, we certainly have made much progress. Female members of the SLHTA, which I am honored to serve as President, have done an extraordinary job of ensuring tourism, our nation’s major economic driver, recognizes the value of women. One of the messages of International Women’s Day is that gender equality is good for the economy – and that is the message we in St. Lucia will continue to amplify until everybody will not only hear us but also heed our words.

Indeed, there are many women deserving to be mentioned here as the fearless, determined and passionate trailblazers that they were and still are.

At the SLHTA, we will always remember Eileen Paul. Described by many as “the heart and soul of the SLHTA”, Eileen joined the Association in 1973 when only six hotels and seven restaurants comprised the membership. She was instrumental in taking what was then referred to as the “Hotel Association” to a completely new level after working tirelessly for years, only getting her first real office space in 1990. We miss her greatly and her spirit will forever live on at the SLHTA.

At the SLHTA’s 55th Annual General Meeting held in August 2019, the Eileen Paul Secondary School Scholarship Fund was officially launched. At that same ceremony, hotelier Cheryl Skeete, who served as a Director of the SLHTA for many years, was inducted into the SLHTA’s Hall of Honorary Members. This is the very least we could do to show our gratitude for her years of selfless service to our association and industry and to acknowledge her successes in raising the profile of small hotels.

One St. Lucian hotelier, Mrs. Joyce Destang OBE – a recent recipient of the Saint Lucia Gold Medal of Merit – has done a remarkable job for the advancement of women by ensuring that over 70 percent of her resort group’s management team are women. The SLHTA salutes her and supports her efforts to ensure more parity for women at the highest levels of the hospitality and tourism sectors.

On our Allied Member side, Mrs. Catherine Cooper was recently honored by the Prime Minister as a “no-nonsense woman” who “gets the job done”. Ms Hyacintha Simon, the owner of Alize Inn & Pitons Travel Agency, just celebrated over 30 years in business and her continued commitment to excellence. Congratulations to both.

A celebration of women’s success would not be complete without mentioning Mrs. Berthia Parle MBE. Her many achievements over the span of her career are too numerous to be mentioned here. She certainly broke the glass ceiling by becoming the first female President of the Caribbean Hotel and Tourism Association.

Even though officially retired, Mrs. Parle plays a very active part in the newly formed CHTA Council of Directors Emeriti, but most importantly she has also agreed to take on the role of mentor to our new generation of Women Leaders who are part of the SLHTA’s Young Leaders committee. We are grateful to her and look forward to welcoming more of our women leaders to join us as mentors, for “ Each One to Teach One”. The SLHTA will continue to strengthen our foundation and build pathways so that our young women, when planning their careers, can see the value of selecting tourism as their first, and not their last, resort.

There is no doubt that St. Lucian women have made their mark in St. Lucia’s tourism industry. At the highest executive levels, however, our sisters’ potential is still undervalued.

Women often work more, earn less and have fewer choices than their male counterparts. And yet they persevere and continue to make strides, all while some may be facing prejudice, or even abuse or violence at home, in the workplace or elsewhere. This has to change and the SLHTA will strive to ensure it does.

And finally, there is no doubt that the fortitude of our women in this country will once again be tested as we juggle our work responsibilities with keeping our loved ones safe as COVID-19 leaves its mark around the world. I have full confidence that our women will be the voice of reason, not panic, the voice of facts, not fear, and ultimately the pillars of strength to see us through.

I salute the Women of St. Lucia and our Women in the Hospitality Industry.

May God continue to bless and safeguard our Helen of the West.