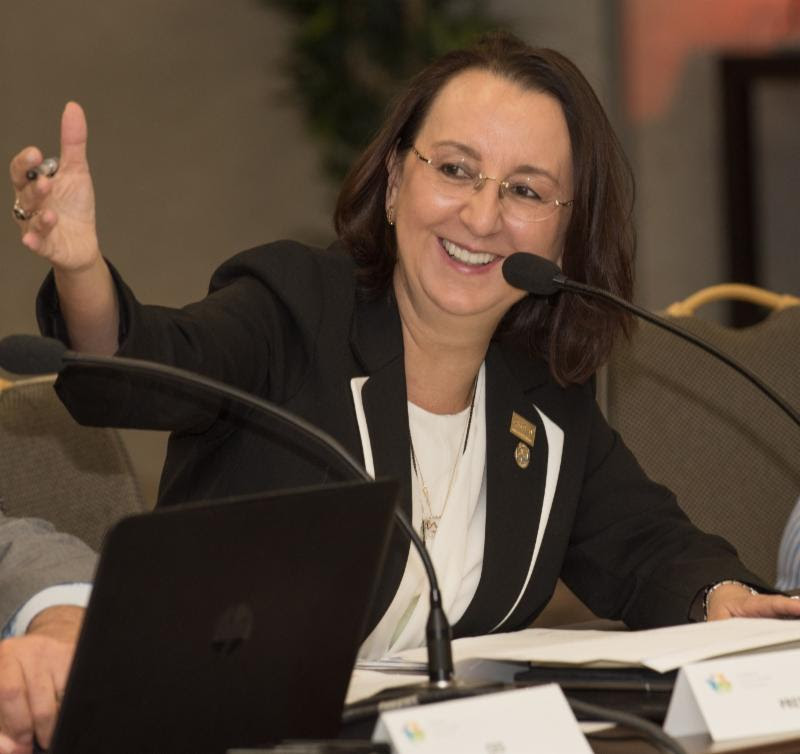 Karolin Troubetzkoy,  immediate past president of CHTA and Executive Director of Anse Chastanet and Jade Mountain Resorts, assumed the Presidency of her national trade association on Friday after serving for almost three years as head of the Caribbean organization. She succeeds hotelier Sanovnik Destang of Bay Gardens Resorts, who did not stand for re-election, and is joined by newly elected First Vice President John Mathurin, owner of Serenity Vacations & Tours, and re-elected Second Vice President Erwin Louisy of
Barefoot Holidays St. Lucia.

“Karolin has a wonderful ability to harness the skills and enthusiasm of all stakeholders to enhance the capacity of the tourism industry to benefit all sectors of society and we are sure she will shine in this familiar role,” said Comito, who described Troubetzoy’s impact at the regional level as exemplary.

Addressing SLHTA’s AGM following her election, Troubetzkoy pledged to take a serious look at succession planning and ensure that qualified and experienced tourism leaders get exposed to SLHTA operations and be ready and prepared to take on this mantle of responsibility sooner rather than later.

She called for a comprehensive consultation on changes to the bylaws, board structure and the presidential election process and eligibility for hoteliers and allied members.

Troubetzkoy devoted much of her time in office at CHTA coping with heavy challenges from Sargassum, Zika, Brexit and the devastating hurricanes of last September. She noted however that the need to cope with and recover from adversity had given the region another skill: “Resilience has become our new mantra and guiding light as we strive to make our small island developing states more resilient to these shocks.”

She added there remained many more challenges, including “mitigating the effects of climate change, preparing for the danger of stronger and more devastating hurricanes, dealing with environmental issues from mosquito-borne illnesses, coral bleaching to plastic pollution, water and waste water management and introducing more renewable energy sources.”

Last but not least, she said, “was our very serious concerns for our own and our visitors’ safety and security. All of these challenges need both our individual and our collective attention.”

Expressing her condolences to the family of Nereus “Corsol” Francis, the SLHTA member who was murdered just a few days earlier, she said it was time to take “a hard look at how we educate our children, how much quality time we are able to spend with them or to give them, and the negative consequences of our failure to honor these commitments which could very well result in their being deprived of a brighter future.”

She linked these societal priorities to tourism, which cannot operate in a bubble. “What affects us as communities, countries and as people, also affects our tourism industry,” she argued.

Whether looking at challenges thrust up by the new and successful sharing economy for traditional accommodation providers, existing or potentially new taxes, high airfares, limited regional and international airlift and connectivity, the new president believes these issues “influence the current and future business volume, and ultimately our successes.”

She called on St. Lucia’s public and private sectors to work more collaboratively “to share with the world the diverse richness of our region – our cultures, art, music, food, history, natural environment and the many types of accommodations experiences.”

In addition to creating enabling environments for local entrepreneurs to flourish, training was particularly important for St. Lucia, she contended, because of the possible doubling of available rooms in a few years. “For this expansion of our industry, we must be prepared to make the necessary investment in training and training facilities to develop the skilled work
force required to fill the jobs that will surely come.”

Recognizing the need to take a look at the vertical integration developing in the country’s tourism industry, Troubetzkoy asserted conflicts of interest between industry stakeholders will require intense discussion: “It will fall to the SLHTA, and me as your President, to ensure that there will be transparency, open dialogue and communication at all times, as it is essential for all members and all sectors to have a voice at the table and be represented fairly and objectively.”

So, regular meetings with both public and private stakeholders are essential and, she reported, “we have already begun, and I look forward to continuing our work to engage with our future young leaders.”

The new SLHTA president thanked her predecessor, Sanovnik Destang, for the great work he had done. “I want to assure him and our members that the projects he is engaged in and continues to be particularly passionate about, such as our Virtual Agricultural Clearing House, linkages in general and young leaders’ development – all of these will continue to play an important part in the Association’s work.”

She also committed to working with him to see the St. Lucia Tourism Enhancement Fund (TEF) go from strength to strength. “Four years, seven million dollars and 120 projects later, we certainly believe that we are on the right track and truly appreciate our industry’s support for the TEF.”

About the Caribbean Hotel and Tourism Association (CHTA)
The Caribbean Hotel and Tourism Association (CHTA) is the Caribbean’s leading association representing the interests of national hotel and tourism associations. For more than 50 years, CHTA has been the backbone of the Caribbean hospitality industry. Working with some 1,000 hotel and allied members, and 32 National Hotel Associations, CHTA is shaping the Caribbean’s future and helping members to grow their businesses. Whether navigating new worlds like social media, sustainability, legislative issues, emerging technologies, climate change, data and intelligence or, looking for avenues and ideas to better market and manage businesses, CHTA is helping members on issues which matter most.
For further information, visit www.caribbeanhotelandtourism.com.